It’s a place where one might expect the most elegant dinner parties.

There’s a trampoline and a swimming pool. You can kiss the dog right on the lips, and nobody will judge you for it.

Plus, there’s also a good chance that you will find something fun in the pantry. In this case, it was this jar of Lao style bamboo shoots.

Lao style means pickled, and these were hot, sour and very aromatic. They’re often used in soups and also eaten raw in salad. Instead, I had the idea of using pork belly. This turned out to be a very good idea.

Rub one pound of uncured pork belly with teaspoon of salt, and allow to rest for ten minutes. Cut into 1x1x1/2 inch cubes, and fry in large flat pan on low heat. The pieces will start to shrink, leaving the pan coated with a thin layer of rendered fat.  Turn up the heat to crisp the pieces, turning frequently, and spooning the liquid fat over the top to ensure even browning. Remove the nice, crisp pieces from the pan and allow pan to cool.

Drain the jar of Lao style bamboo shoots (about three cups), discarding the liquid and any pickling spices. Add the bamboo shoots to the pan with the remaining pork fat, (unless you crave the heart pounding excitement of a kitchen fire, do not add them to hot fat).

Turn up to medium heat and fry until you see a bit of browning, and reintroduce the crisped pork. Toss again and serve immediately. 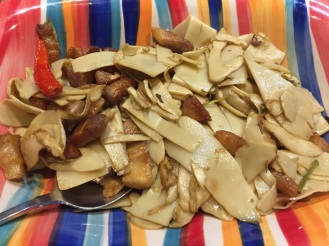 The result was delicious exactly as it was. This is a two-ingredient dish, but the flavors were remarkably complex. Not only did the richness of the meat would balance well with the strong flavors of the bamboo, but the bamboo managed to add flavor to the meat, even in the short time that they were cooked together.

If you do want to add a third element to the dish the possibilities that come to mind would be either tofu, cut thin and browned, or wide rice noodles.