It’s been a very busy two weeks, starting with a short trip to Germany for a conference in the lovely city of Leipzig. It was an event at the University of Leipzig, which is running an extensive, multi-year project on secularities.

After that, an overnight flight back to Shanghai, and two days later, back on another plane to Yunnan to come and do some more work on China’s dairy industry. I’ll be presenting this paper at Fudan on the 24th, so time to get to work!

One of the things I am doing here in Dali is talking to people about how things have changed since the industry started taking off in the 1980s. I have the business side pretty well covered from other materials, so now I want to talk to primary producers, i.e., the people with the cows.

I was already here in the summer, and so met up with some old friends, like the owner of a business that makes “milk fans.”

Now in case you don’t read my blog regularly (gasp!), “milk fans” (乳扇子) are a traditional dairy preparation unique to this area. They’re fresh cheese that is stretched and dried on bamboo poles, which looks like fans–hence the name. You will see vendors in Kunming selling it roasted or fried, but the production is mostly here.

This shop mostly sells on a large scale, but has a little room in the back where they make small amounts for people like me who want to see how it’s done.

The first part is just like making ricotta: heat milk to a low simmer and add a souring agent to make it curdle. For ricotta, I usually use a few tablespoons of lemon juice. Here she is using lactic acid that is leftover from making yoghurt. That’s a lot stronger, and the milk curdles almost immediately. 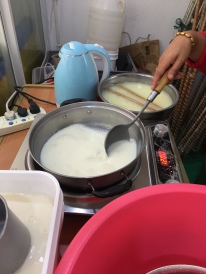 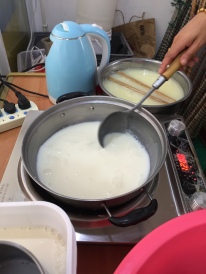 She then strains the curds, and uses a spoon to push out the extra water and start to work them into a stretchy ball. This is when we go from ricotta to mozzarella in texture. She returns the ball to the pan and spends a few minutes moving it around in the whey, pressing it with the back of the spoon to squeeze out more water, and bring out the elasticity. The cheese gets much denser and stretchier. 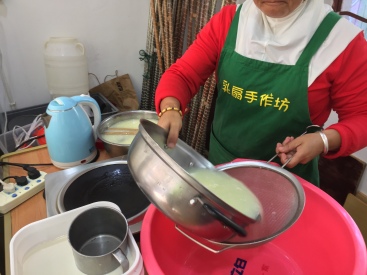 Finally, she takes it out and rolls it around one wooden dowel, then around a second. The cheese turns from a lump to a sheet, that she stretches around two vertical poles. She made this look quite easy, but I am sure that getting the cheese to stretch evenly and thinly without tearing is something that takes a lot of practice. 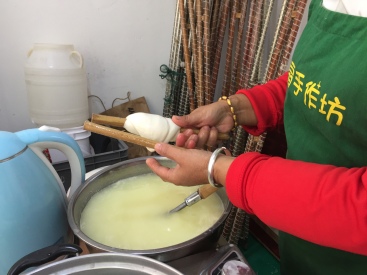 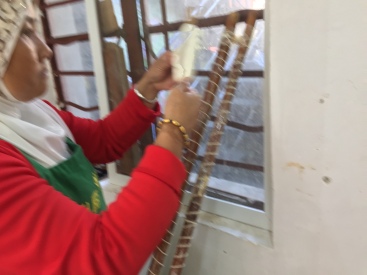 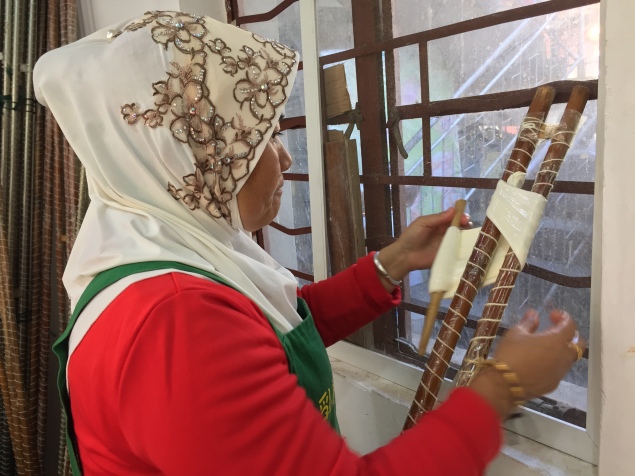 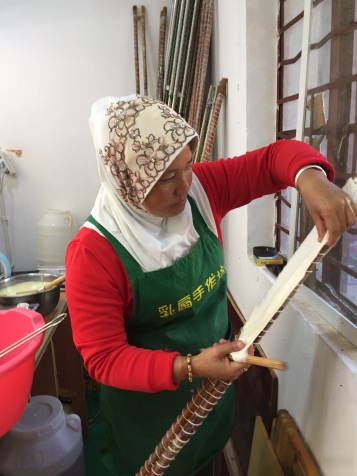 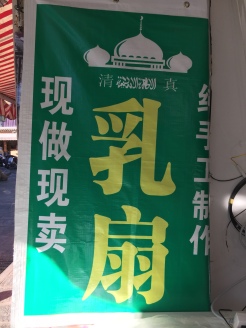 The sheets are normally dried and become rock hard. To eat, they need to be softened over heat, hence the frying or roasting. It is common to see them sold roasted with sweet condensed milk, and then rolled up on a stick. It’s like wearing a hat that says “tourist” in big flashing lights.